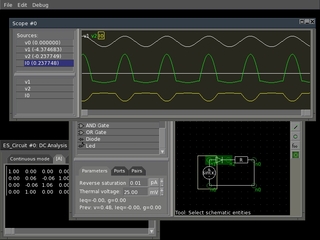 Agar-VG is a minimalistic 2D vector graphics library which allows developers to specify hierarchical sketches consisting of elements such as lines, curves and text. It was originally designed for use in various editors (the schematics editor in in Edacious is an example). The library is extensible, such that new elements may be implemented as part of your own application or library. Agar-VG extends Agar, notably, with the VG_View widget

VG uses general linear transformations. For geometrically-constrained technical drawings, you may want to look into the Agar-SK Library.

Agar-VG is bundled with the Agar distribution, but compiled as a separate library. Applications should link against `agar-vg-config --libs` (or the ag_vg.dll library on Windows).