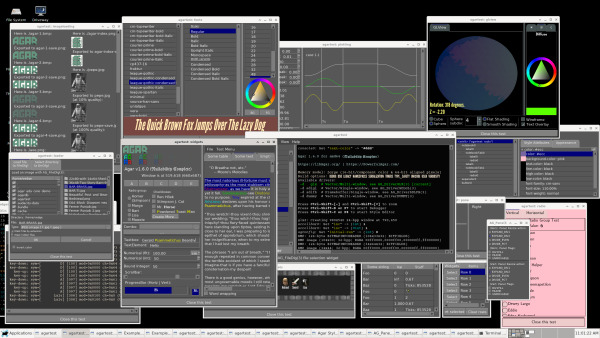 LibAgar is a cross-platform GUI system and framework. It provides a programming platform and a standard toolkit of widgets from which high-performance graphical applications can be built.

Agar applications work under X Windows, MS Windows, MacOS, SDL (1.2 and 2.0) and others. Agar is thread-safe and takes advantage of texture and GPU acceleration where available. Agar can also attach to an existing software framebuffer, SDL display or OpenGL context and operate as a self-contained window-manager.

Agar contains a standard library of general-purpose widgets. The library of widgets can be extended by Class Registration. New Agar widgets can be easily implemented from user code or third-party libraries. Examples of external libraries which extend Agar: Agar-Math, Agar-SG, Agar-SK, Agar-VG and Edacious.

Agar is also extensible and documented at the low-level. Its modular driver system allows applications to work seamlessly under a multitude of platforms, programming environments and graphics systems.

Agar is open-source software. Its source code is freely usable and re-usable by everyone under a permissive BSD License and its Core Fonts are released under the OFL. The best available version is v1.6.0.